Since the transition from “R-Number” designations to “End of Line” designations, Regional Rail customers have been seeing in grayscale much more often. Whereas before customers would know to look for a Blue destination sign for R5 routes or a Yellow destination sign for Airport trains, customers must now rely on reading the actual destination signs to ensure they are boarding the correct train. At first, this seems like a silly point to emphasize since commuters often know where their train is going. However, visitors and infrequent riders may very well get confused by similar destination names (such as the Norristown/Doylestown sign in Figure 31) or trains on the same line with multiple destination locations. Moreover, Regional Rail customers running to catch their train would be able to see at a glance from a relatively far distance if a train is headed to their destination, rather than having to run to the door and read the sign. As such, employing the current system of Regional Rail colors to more signs throughout the system could easily improve customer satisfaction for both frequent and infrequent riders alike.

Nearly every city throughout the nation, with the notable exception being the MBTA Commuter Rail in Boston, utilizes color-coding to indicate train destinations at major terminals. In addition, as the need for more color-coding becomes increasingly apparent, stations are being upgraded to feature new amenities capable of displaying departures with colors (such as NJ Transit’s NY Penn Station 7th Ave. Concourse seen before in Figure 33 and afterward in Figure 34). SEPTA is also one step ahead of other agencies in having the equipment necessary to color code lines on the trains themselves. Newer equipment features a colored LED section specifically for this purpose and older equipment utilizes slots for slide-in destination signs (the only form of color currently in use is a small band on the end visible only by the conductor). With the majority of the necessary infrastructure already in place, adding colors to train destination signs are an easy but dramatic fix for improving RR CS. 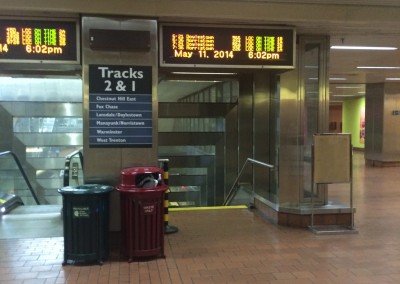 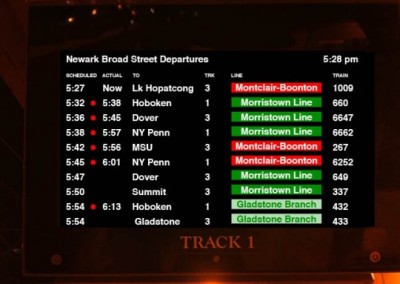 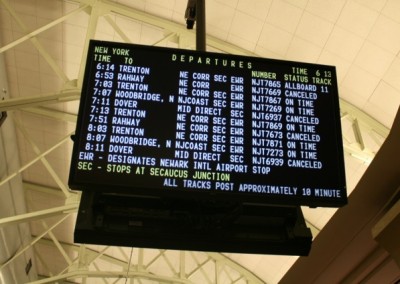 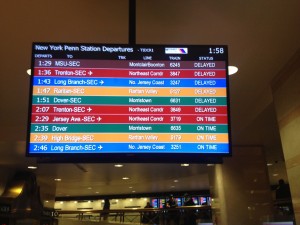